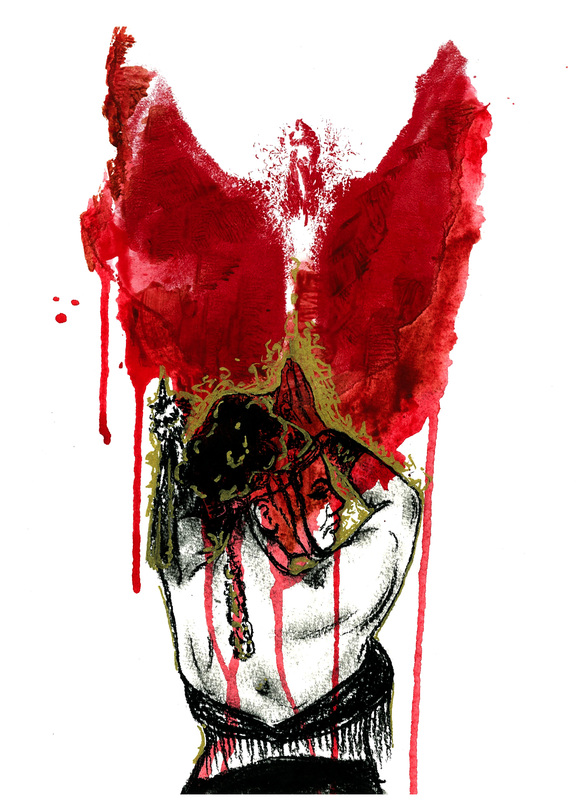 J Minchin, 2015, Our Yoni - Self 3, Mixed Media on paper.
Artist John Woseley uses natural processes to direct the flow of his artwork to avoid the 'Imperialist Gaze'; the way in which the artist takes on the role of the absolute lord and commander of the reality they portray. His work is formed by the processes and movement of nature, rather than allowing the imagery to be held captive to the rigid direction of the artist's vision.

If there was ever a subject of artistic vision held captive to this imperialist gaze, it would surely be the female form.  Women's bodies have been playgrounds of fantasy and idealism for artists since the dawn of art, from the shapely curves of the woman of Willendorf to the ubiquitous use of photoshop in modern media.

Using Wosely's methodology of giving artistic voice to the subject matter, I sought to subvert the artistic process by which womens' bodies are represented, creating prints through a process of painting and printing bodies directly to paper.  To do this I sought to borrow inspiration from Yves Klein who used a similar process in creating his own artwork. Rather than the raucous indulgence of a male artist surrounding himself with, and manipulating the female form, I created a Temporary Autonomous Zone in the mode of esotericist Hakim Bey that allowed male and female participants to feel safe within a physical space that allowed for candid expressions of identity, and comfort in experiencing the vulnerability of nudity in a group space. Everyone created their own prints, and the night was characterized by the novelty of a comfortable and creative transgressive space.

In this way I evoked the ideology of performance art, conceptual art and Dada of the event of creating the art as being in itself inseparable from the artwork.

While I was fond of all the works, I completed the process with six of the vulvic prints, coupling the images with drawings of the women themselves, creating portraits that are at once intimate and challenging.
Purchase your print now - CLICK HERE -